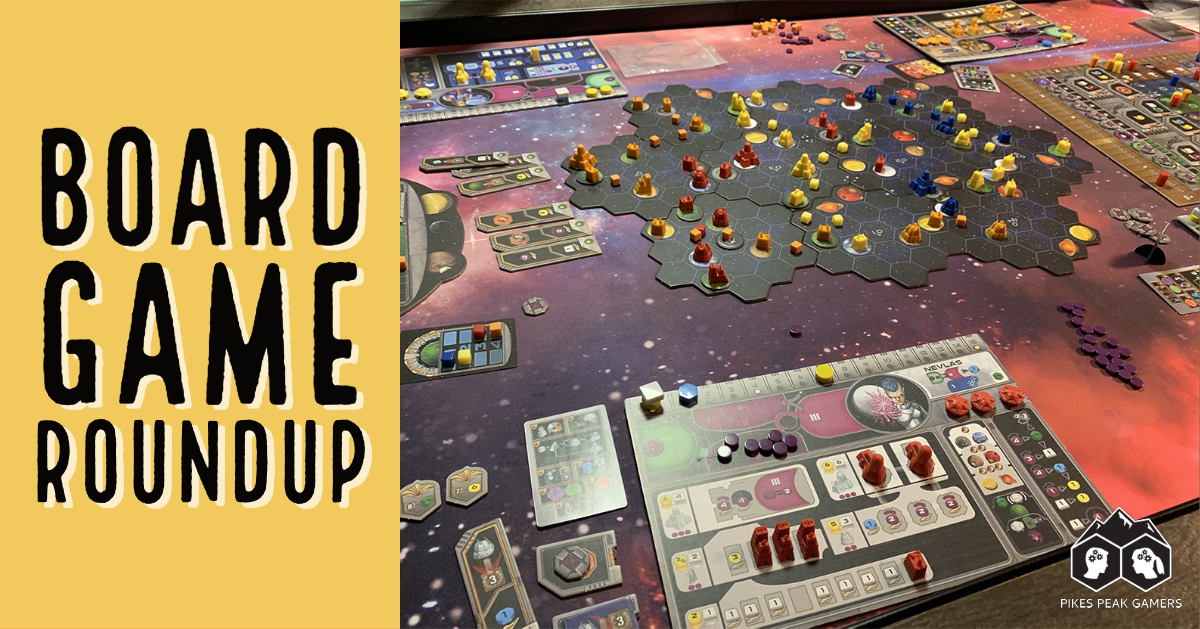 I’m always on the lookout for new games, and especially for games that bring something new and different to the table. In this post, I’m going to go over five games that I enjoyed recently, starting from the most lightweight to the heaviest.

The Mind seems like it was created by a challenge to have a game with the simplest rules. You have a deck of cards from 1-100 and all you have to do is play them in order. But trick is that you can’t talk or come up with a convention about how or when to play the cards. On the surface, this sounds like a totally boring activity, either ridiculously easy or practically impossible since how can you really communicate? Yet I found it incredibly fun, and wanted to play it over and over again, as in the right spirit, everyone is making body language and gestures, trying to get a feel for how big is the gap between the last card and what to play when. It’s short and sweet, gets everyone involved, and the longer you play, the tenser it gets, as you want to make sure you’re playing when you’re supposed to.

Reef is a simple abstract game about playing coral reef pieces in order to score points. Everything is in fours here: your board is a 4×4 grid, the coral pieces can be stacked up to 4 high, and you can only hold up to four cards in your hand. How many different colors of pieces are there? That’s right, four! On your turn, you either pick up a card or you play one. When you play a card, you add reef pieces to your tableau and then score combinations. What I love about this game is how to plan what cards you get and how to score them in order, so that the pieces you’re adding on one card will help you when you score the next one.

Vast is a game about a dungeon. On the surface, Vast is not particularly complex, but it is a bit daunting to learn from scratch. You see, each player has their own role with their completely independent ruleset for how to play. One player is the knight, another is the goblins, a third is the dragon, yet another is the dungeon itself (referred to as the Cave). There is also a thief, a character that seems to be most interesting when you have 5 players. This game is a challenge for design, as each player is really doing something quite different. I thought that some players would get stuck and not have a chance to win, and while that might be the case partway through your first game, after a couple of plays, I think you can understand all the different ways your role can influence the game. I found how asymmetric this game was to be fascinating, and it was clear that there was a lot of thought and playtesting that went into balancing the various roles. It did take us a while to play as everyone had to learn their own roles, but I look forward to playing this again, from a different perspective.

Teotihuacan: City of Gods is a really well-designed worker placement game. It bundles a number of elements that I enjoy into a great package. You’ve got a rondel, and you’re moving your workers around it. One space lets you acquire technologies. You’re collectively building a pyramid, so the acquisition of resources and deciding where you place the tiles on the pyramid generates some interesting choices as well. If that wasn’t enough, the number of players at each location influences how much it will cost, and how many of your own workers impacts how rewarding the location is. To top it all off, your workers become more powerful over time, and you then have to decide when to reset them and take advantage of the reward. Since you have to feed your workers, gaining a bunch of workers is not necessarily the best and winning strategy. I think I just loved how much was going on in this one. I’m not sure that anything individually was new, but I hadn’t see them bundled in quite this way. Certainly this is a game that will appeal to heavy gamers.

Finally, I got around to playing Gaia Project. I thought it would just be a rehash of Terra Mystica, but in space. I love Terra Mystica, but what would really be new here? For those unfamiliar to Terra Mystica, you’re claiming places on the board by terraforming them, and then building buildings on them. Each player is their own race, which gives an asymmetric aspect to the game. You move up temple tracks as another way to score points, as well. Being next to players is beneficial, as it provides you power that you can then use for bonus actions. In Gaia Project, the board is made up of modular pieces covered with planets that adds to more variety, and the various “temple” tracks have been converted into more interesting technology tracks that enable you to make real progress in the game. The use of power in this game is much better, as you don’t have to be quite so close to take advantage of it, and you have fewer pieces to play. Since you only occupy planets in this game, and not every space has a planet on it, there are some empty spaces that force you to have to spread more along the board. It just makes for a more dynamic game. Anyone who likes Terra Mystica will surely enjoy this, and if you missed out on Terra Mystica, Gaia Project is an excellent game for the uninitiated as well.

I did want to close just by saying that as much as I’m a lover of lots of games, not everything I play is great. I also recently got the opportunity to play Dinosaur Island. I know that there’s lots of love out there for this, and the game’s theme is great, as are its production values. However, I couldn’t help thinking there was too much luck in it, but maybe that’s me. I also played Cacao, a tile-placement game where the meeples are printed on the cards, unlike in Carcassonne. It was somewhat interesting, but I felt like there needed to be more variety to the types of tiles available in order to make for a more compelling game.

Anyway, I’m thankful for all the opportunities to get my game on lately. Until next time, happy gaming!

The Gaming Sommelier’s Board Game Recommendations By Genre